Sales Tax Nexus, sigh. I remember the days when Nexus meant an expensive brand of shampoo, the kind I sneaked in my mom’s shower because it made my hair so much shinier.

These days, it means something quite different.  To be honest, it can be confusing to understand. If you’re an Amazon FBA seller, you probably know that you have nexus, somewhere, somehow. But if you’re still not totally clear on what it is, or what having it means for your business, don’t worry. You’re not alone. The rules around nexus keep shifting as the IRS and state tax boards get more used to the idea of online business. 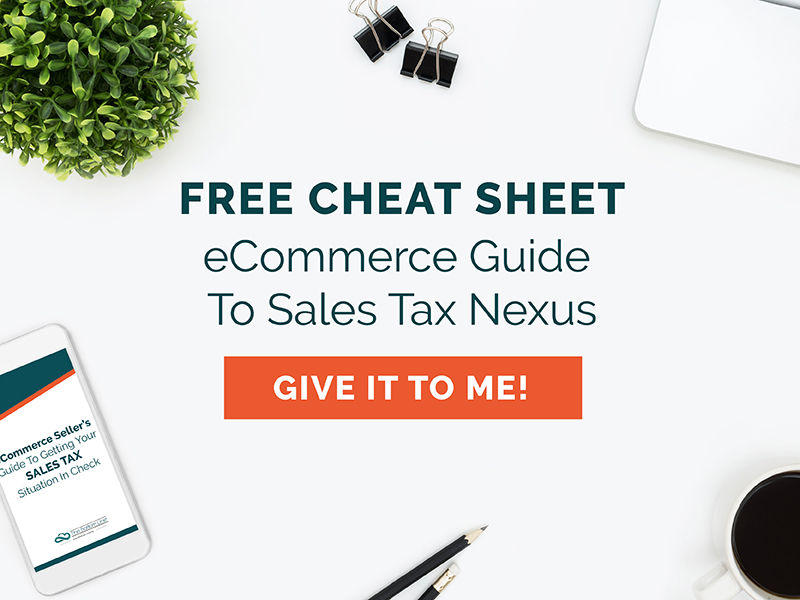 We were able to catch up with our friend Peter Mantell at Ampersand Accounting. He gave us the skinny on what nexus means, how online businesses should handle it, and what changes in sales tax law he sees coming.

What are the two types of nexus?

The Bottom Line CPA: First, let’s get our terms straight. What does nexus mean for online retail businesses?

Peter Mantell: We have 2 types of nexus: physical and economic. A lot of different resources out there cover both, and this can be confusing for retailers.

Physical is pretty clear cut—it’s when a business has a person, place or thing operating out of a state.

Having inventory stored within a state is Economic Nexus. It doesn’t have to be a lot of units. Nexus can be triggered by just one product. Most third-party retailers aren’t big enough to establish economic nexus. Which is installing a certain volume of inventory in that state. You’ll see a lot of info online about economic nexus, and it’s important to understand the difference.

Nexus is like a virus! If your business is “contaminated” with it, everything else in that business is contaminated. For example, if you have nexus through Amazon, but you’re also selling through eBay, Shopify, etc., you’re expected to collect sales tax on everything in all your stores under that corporation.

How do you protect yourself?

TBL: What states are being the most aggressive in their nexus/sales tax crackdown, based on your direct experience? What can sellers do to protect themselves?

PM: California, Florida, Texas, Massachusetts, Pennsylvania, Washington, Illinois, and New Jersey are the most aggressive in going after third-party retailers.

Distinctly, Washington, California, Pennsylvania, and Massachusetts have done very visible, aggressive programs, such as nexus questionnaires. In Massachusetts, the Department of Revenue actually took Amazon to court to turn over all their third-party seller data…and they won.

When you have Nexus any state can come after you for back-owed tax liability as far as eight years. They can hit you with fines, penalties, interest, all kinds of nasty stuff.

One of the ways to do damage control is to participate in a program called the Voluntary Disclosure Agreement (VDA). This is where you come forward to the state voluntarily. You then disclose your sales, then, the state Department of Revenue will waive fines and penalties. The look-back period is limited to 3 or 4 years. In many cases, they allow you to do a payment plan to bring your back taxes current.

The VDA program drastically cuts down on the damage done by not collecting sales tax. It also gives you a bit of an insurance policy against an audit. If you’ve done a voluntary disclosure agreement, the state can’t come after you for anything prior to that unless the state finds evidence you didn’t properly disclose all information at the time of the VDA.

There are some caveats with this program, the main one being that you can’t do a VDA if the state has already sent you any type of notice related to sales tax.

Do you need to get a move on it?

TBL: If you don’t have nexus in one of the states you mentioned, how urgent is it really to get your sales tax situation set up?

PM: It’s important to know that the Supreme Court is going to re-review the Quill case this summer. Back in 1992, the state of North Dakota took a mail order company (Quill Corporation) to court over sales tax. Because Quill didn’t have physical nexus in North Dakota, though, the company fought the case all the way to Supreme Court, who finally determined that a third-party retailer could not collect sales tax in over 10,000 jurisdictions throughout the US. It was just too complex and impossible at that time.

Since 1992, though, a lot has changed. There are tools for doing exactly what they said was impossible, and a huge number of small business owners are doing exactly what Quill was doing—selling to thousands of jurisdictions around the country with no physical nexus in those states. This case will be re-reviewed this summer, and there’s a really good chance that the court will ratify this case to some degree. Which means there is future potential for all states to pursue sales tax whether you have physical nexus or not.

As a retailer, you should also be proactively doing everything possible to get the sales tax turned on for every state where you have nexus.

(Ampersand Accounting offers compliance services where we can look at a third-party seller’s store and tell them their sales tax exposure. We also offer free, no-obligation consultation of your current nexus and sales tax filing footprint. Learn more here)

Do you understand multi-state filings?

TBL: Along with conversations about sales tax liability, more and more retailers are coming to us asking about multi-state income tax filings. What's your take on that?

PM: When people sign up for the sales tax amnesty program, part of the deal to get the amnesty was that they not only collect sales tax, but do income filings going forward. If a seller is collecting sales tax within a state, and they hit a certain volume of revenue within a state, it’s going to trigger income responsibility within that state. The state can then come after what’s known as franchise tax. For retailers that are doing certain volume sales, there’s a possibility that they’ll have to do income filings in multiple states. Where we think this will be most applicable is in California, Texas and Florida—on average, most third-party retailers have a third of their accumulated sales in those states.

How will the changes affect you?

TBL: What impact do you see coming with Amazon now collecting sales tax on behalf of third-party sellers in Washington state? Like, how does that even work? Do you foresee that shift happening for other Amazon states?

PM: This year, the state of Washington and Amazon made an agreement where Amazon is going to collect and remit sales tax on behalf of all third-party retailers to the state. However, even though Amazon is collecting and remitting, now you have to register with the state and submit how much they’ve collected on your behalf.

This also applies to drop shippers who don’t necessarily use Amazon FBA. You may need to turn on sales tax collection simply because they’re collecting on your behalf.

We don’t know if it’s going to happen in other states or not—that’s still in beta. (Washington agreed to it, but really didn’t like it. There is some suspicion it’s because there’s an agreement in place that Washington is giving up some points to Amazon on the sales tax collected—neither of them will confirm, so it’s just speculation on our part.)

The point is that sales tax collection isn’t Amazon’s responsibility alone—third parties still need to do it themselves, especially if they sell on other platforms. Amazon is essentially forcing your hand by collecting and remitting on your behalf. Amazon FBA sellers should get a seller’s permit and record that Amazon did this for them in their filings.

Will the Accounting world be different?

TBL: With so much uproar around sales tax liability, how do you think this will impact the accounting industry for companies who provide services or software for sales tax filing and management?

PM: A lot of retailers get confused about nexus because local CPAs have advised them only with regard to local tax and income laws. An average CPA is only versed in their home state, and potentially a bordering state. Most will not spend the time and effort to know interstate commerce laws. A specialist will be versed in those things. That’s why TBL is so great—they’re one of the few firms capable of doing filings in all the states necessary and applicable.

The bottom line (haha, get it?) is that all e-commerce retailers need to have a paradigm shift. It’s easy for small business owners to see all these new requirements and say “Woe is me, the big guys are beating up on me.” But the truth is that this is the cost of having a portfolio of clients all over the US. You need to pivot from thinking as a mom-and-pop shop and think like a national business owner. Start with looking for a CPA that understands tax law beyond just one state or region.